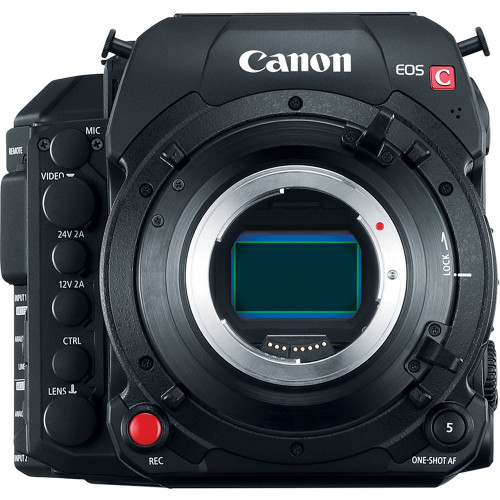 This Canon EOS C700 Full-Frame Cinema Camera features a full-frame sensor that allows you to capture images with up to 5.9K resolution. This version of the EOS C700 FF Digital Cinema Camera comes with Canon's EF lens mount with a positive-locking mechanism, minimizing play found in traditional spring-loaded, bayonet-style mounts. With a physical resolution exceeding that of DCI 4K and a dynamic range of approximately 15 stops, the EOS C700 FF Digital Cinema Camera is ready for today's 4K and HDR productions. The full-frame sensor and triple DIGIC DV 5 image processors enables full-frame capture at 30p and 4K cropped capture at up to 72 fps to the CFast 2.0 card slots using the XF-AVC codec. Both relay and simultaneous recording is possible, and you can even record in ProRes on one CFast card, while simultaneously recording to XF-AVC on another CFast card. Raw recording is also possible in full-frame at up to 60 fps, 4K Super35 crop up to 72 fps, and 2K Super16 crop up to 168 fps using an optional clip-on Codex Digital Recorder.